The Japan Foundation, New Delhi organized a musical concert of Japanese instrument – ‘Koto’. This time it featured Mr. Tomoya NAKAI and Ms. Noriko MATSUZAKA as the artists, who played classical masterpieces as well as contemporary music. Koto has recently gained publicity in India when the current PM Mr. Narendra Modi played Koto in his previous visit to Japan (at that time he was Chief Minister of Gujrat). The Delhi concert was a participating event at ‘The IIC Experience: A Festival of the Arts’ and the concert also travelled to Guwahati. 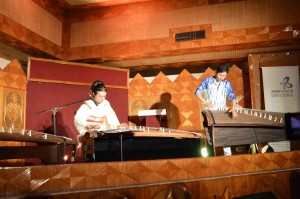 KOTO is one of the traditional music instruments of Japan, made from Paulownia wood, or often called as empress tree. The shape of KOTO is said to resemble that of the dragon and even the names of various parts of the instrument correspond to parts of dragon’s body. It is  six-foot long instrument which usually has 13 strings, but 17, 21, 25 and 30-string examples are sometimes seen. The tightly stretched strings, which are balanced on an ivory or plastic bridge laying on the body of the instrument, are plucked using ivory picks on three fingers. The player sits behind the instrument, using the left hand for tuning (by pressing down on the strings) and occasionally for plucking them. The picks are only used by the right hand.

Tomoya’s first encounter with the koto was at the age of six. He graduated from the Department of Traditional Japanese Music of the Tokyo University of the Arts. There he won the highest award for practical skills. He plays traditional koto and jiuta-sangen (three-stringed shamisen for performing traditional folk ballads). He appeared in TV shows on NHK’s education channel and also performed at the World Heritage Concert at Karnogami Jinja, Kyoto. Having received wide acclaim in a concert tour of Mexico, Chile and the Dominican Republic, sponsored by the Japan Foundation, he attended the opening events of the Japan – Mekong Exchange Year (2009) to Thailand and Vietnam as a cultural ambassador appointed by the Ministry of Foreign Affairs of Japan. Together with the Finnish Kantele player, Eva Alkula, he deepened the cultural exchange between Japan and Finland, conducting workshops and concerts in cooperation with the Japan Foundation.

Noriko is a koto and shamisen player. She started to learn the instruments under her mother Naoko Matsuzaka when she was three years old. Having graduated from the Department of Traditional Japanese Music of the Tokyo University of the Arts and obtained a Master’s degree from the same university, she won the first prize at the first Kenjun Commemoration Music Competition, sponsored by the Japanese Agency for Cultural Affairs. She is an artist who brings the traditional arts into the next era with refined technique and musicality. Her wide range of activities include anything from classical to contemporary music, as well as theater music and appearances in the media.