The Japan Foundation, New Delhi is pleased to hold the exhibition “Nizo Yamamoto Exhibition -The World of Japanese Animation-“.

This exhibition introduces Nizo Yamamoto’s masterpieces (in replica), including beautiful landscape paintings from ‘Grave of the Fireflies’ (1988), ‘Princess Mononoke‘ (1977), ‘The Girl Who Leapt Through Time’ (2006) and many more.

Opening at 5 pm on 6th Ocober, 2017 with the artist Nizo Yamamoto

山本二三 Nizo Yamamoto born in 1953 in Nagasaki, Japan. Having had been good at drawing since his childhood, he studied architecture and also worked with an art studio while he was studying. His illustrious career as an art director includes TV animation, ‘Future Boy Conan’ (1978), Film masterpieces ‘Grave of the Fireflies’ (1988), ‘Princess Mononoke‘ (1977), and ‘The Girl Who Leapt Through Time’ (2006) which received the Best Director & the Minister of Internal Affairs and Communications Award at the 12th AMD Award ’06 in Japan.

His exhibition titled ‘The World of Yamamoto Nizo, Master of Japanese Animation Art Director’ has travelled around in Japan, attracted more than 6 lakh visitors. Currently he works as a representative of the art studio, Kaieisha, where he is creating an animation film of ‘Tree of Hope’ and designing ‘Goto Hyakkei’ descriving his hometown, Goto Islands. “Yamamoto Nizo Museum’ will be opened in Goto, Nagasaki in summer, 2018.

This is his first exhibition abroad.

Report of the event 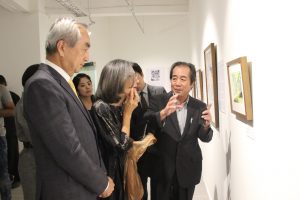 The number of attendee went up to 101 numbers.
The artist, Nizo Yamamoto was presented bouquet by Misako Futsuki on behalf of The Japan Foundation, New Delhi. Along with Kaoru Miyamoto and another member of the audience, the two guests were invited to light the ceremonial lamp to commemorate the opening of the exhibition.

Nizo Yamamoto was then invited to the floor to say a few words to the audience.
The Artist was gracious enough to answer all the queries of the fans and also very generously took pictures and gave out signatures along with his knowledge to those that came seeking.
This was his first exhibition abroad. 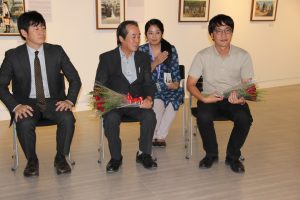 On the 7th of October, Japan Foundation, New Delhi, organized an open demonstration, ‘Nizo’s Techniques on Landscape Painting’, by the artist Nizo Yamamoto. With an audience strength of 163 people the program started at 6.30pm with a brief introduction by the event emcee Misako Futsuki, Director (Arts&Culture Exchange), the Japan Foundation New Delhi.

The artist, Nizo yamamoto addressed the audience. He recounted the stories from his early life, especially about his humble beginnings and the beginning of his career at Studio Ghibli’s production of Laputa: The Flying Castle.
Nizo Yamamoto then started with the demonstration which was only interjected by him either instructing the audience through his techniques, or telling interesting tales about his trip down memory lane. 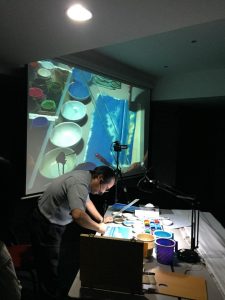 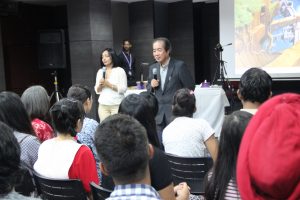 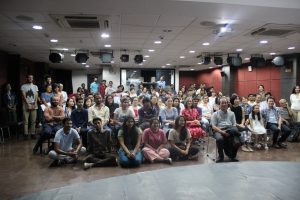 Once the demonstration was done and the beautiful picture came to be the painting was brought aside to be displayed to the audience. The floor was then opened to the audience for the Q&A round. After the conclusion of the interaction between the audience and the artist the audience was allowed to go and take a look at the painting.
Yamamoto was gracious enough to have the audience take a look at his various brushes and the various colours on display. He had also told them that he will be leaving his book of instruction on illustration at the Japan Foundation library for the students to come and study.

The painting which Nizo Yamamoto drew at the demonstration. 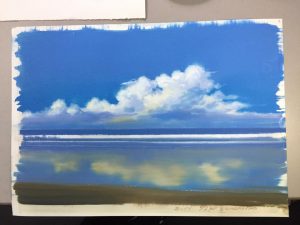 It’s been a great pleasure for us to invite Nizo Yamamoto, the master of Japanese animation to India as his first exhibition abroad. With the great number of the audience, we feel there is such popularity and interests in Japanese animation in India. Nizo Yamamoto often says that he would like to “paint gentle, soft scenes that do not strike at the viewers’ eyes.” We hope that you will enjoy the mysterious reality that draws us all into the world of these paintings. (Misako Futsuki, Director of Arts&Cultural Exchange, The Japan Foundation, New Delhi)