The Japan Foundation is please to present this film festival with the theme “Modern Japanese Women: Finding Strength Within“ to celebrate the strength and courage of women in Japan and all over  the world. Through this festival, we are striving to show how the women in Japan live today, growing from strenth to strength in a rapidly changing world.

There will be a talk and discussion on Modern women: Finding the Strength Within with Ms. Anandana Kapur, Film Maker, Author and Social Scientist on 19th November, 2016 from 5:30 pm

ENTRY IS FREE for the film festival. 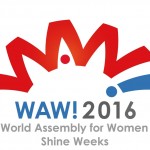 This film festival is also a side event of the World Assembly for Women (WAW!)  to be held in Tokyo in December, 2016, where leading figures around the world will discuss and make proposals about various issues surrounding women in the field of Science and Technology, Leadership, Work-life Management, Health, and Peace and Security.